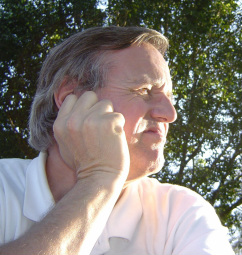 Opening remarks:  This series of reflections began in 1996, and was later published in a bookley for our friends and supporters.  I am reproducing it on this page, so it is quite lengthy, so you can come back to it often.  I will continue to update it periodically.

Preface
When I think about how God has reached down to me over the years I  am led to think about the people he used to bring me to where I am today. My parents were both gifted and creative people. My mom, according to the owner of the longest running family owned playhouse in the US, was the best character actress he ever saw. My dad, a man who never made his way through college, worked his way up from the docks of Honeywell to become the president of the first major division of Control Data Corporation to break away on their own. Both mom and dad saw what their four children were designed to be and built upon that rather than try and make us be what they may have personally wanted.

There was a spirit of bold creativity that was in me from the start, causing me to go outside the box from an early age and my parents never (and I mean never) quenched that spirit. When I was nine years old, on the first day of a move, I decided I hated my new home and announced I was going “back home.”  They let me walk eight miles back to the old home where I found there was little there left for me. When as a 15 year old I surprised them by riding my bike 170 miles in one day to meet them at the family cabin I was greeted with joy and pride. When I asked some months later, also at the age of 15, to be left alone for three days of tourism in Los Angeles while dad was at a meeting in Malibu, he didn’t flinch. They did so much to build me and my siblings up, realizing and trusting our abilities.

So how did I find this path to Kenya, a place where my wife Deb and I expect to live out our remaining days? When I was five dad got me into door-to-door sales. I loved it and I have no memory of not knowing what I expected to do with my life. At 13 I was selling pets at a large shopping mall. At 19 I was managing a significant shoe store.

But at 28 I found Jesus and four years later journeyed to Africa to see how I might help a group of people on the brink of starvation. That trip
changed my life and God reached down and exposed a part of me that was there from the very beginning, a part I had never seen before.  He called and I answered, but returning to Minnesota I struggled over the next three years with what it really meant. I resisted that call because ever since I sold those sponges door-to-door as a five year-old I was sure retail sales was what I wanted. But I woke one day in 1985 and realized that vision was gone and a new one was there. I enrolled in seminary in fear and trembling to pursue training in missions. Those four years at Bethel Seminary were some of the best years of my life. People laughed when I told them I was there to become a missions pastor when I had never been a missionary! But thirty days before I graduated the director of missions and outreach at my home church, Colonial
Church of Edina in Minnesota, resigned and I was asked to apply for the position.  A coincidence?  I have come to call these moments
“God-incidences” and my journey began in earnest.

For the next five years I learned about missions and ministry knowing all the time that Africa was in my future. Then Deb came into my life
with a heart for it all and a calling of her own, and we planned our adventure to Africa together. Of all things I loved most about my past work was seeing potential in people and training them for leadership. So when I had the chance to interview people representing places that were emerging in Africa and other parts of the world, I would always ask them “what is it that the church in the West can best do to partner with Churches in countries like Kenya?”  The answer from a wise man from World Vision, Kofi Hagen, was unequivocal— “Train our leaders.”  He went on to say “as long as the West has access to all the resources, places in Africa will look to them for the answers to solve our problems.”  After a pause he continued... “and you don’t have them.” So in 1994 as we led a team from our church to East Africa we searched for mission opportunities working in the area of equipping and training leaders for the church in Africa. On that trip, and after 12 years of preparation and planning, 15 minutes after meeting Dr Phil Walker I knew the search was over. Deb and I joined International Christian Ministries and to this day that is our ministry. ICM is about empowering others to do more than any missionary can ever do. In all these years I have seen God reaching down to show me his world and his people and teach me his lessons. I hope you are blessed by what I have seen.

IHG (In His Grip),
Greg Snell